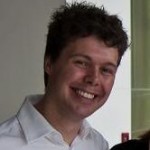 On December 9th 2016, Joran Jongerling will defend his thesis entitled

There and back again: Studying inter-individual differences in intra-individual variability
(Thesis and summary are not available yet)

Modelling individual differences in intraindividual change and variability
If one realizes how the meaning of the autoregressive and cross-lagged regression parameters changes once the model is combined with the LGC model, a natural next step is to include these parameters as random rather than common effects. Doing so would allow individuals to differ with respect to their inertia, and it would allow the influence of one variable on the other to be different across people. However, there are a number of problems associated with including autoregressive and cross-lagged regression parameters as random effects in the model. The current PhD project is focused on developing a random effects extension of the bivariate ALT model and tackling some important problems associated with this extension. This random effects extension of the bivariate ALT model will provide us with a much richer picture of psychological processes as they unfold over time. Moreover, it will allow us to investigate moderation effects in these longitudinal models. For instance, if we have observed the affect of two spouses (bivariate longitudinal data), we may find that the effect of one spouse on the other, represented by the cross-lagged regression, depends on personality characteristics such as Agreeableness and Neuroticism, but also on relationship quality. This would imply that the influence of one partner on the other is moderated by personality and relationship features.